Ports at Limerick and Foynes have seen record growths over the past year, exceeding the national average and the company’s own expectations.

With a growth of 11.4% in year on year tonnages, Shannon Foynes Port Company reaffirmed its strong performance and contribution to the regional economy in 2016.

For the second successive year, the two largest directly managed SFPC ports have now delivered 10% plus growth, significantly ahead of national and international standards.

Overall tonnages delivered across the company’s activities last year were at just over 11 million, marginally behind the company’s record tonnage levels and reflecting the very significant resurgence at the company over the past five years. The tonnage increases were largely driven by strong performing sectors such as construction, oil distribution, agri and renewables.

The growth levels are also in excess of the upper end scenarios envisaged in the company’s Vision 2041 Masterplan published in 2014 and validate, SFPC CEO Patrick Keating states, the ongoing programme of infrastructural investment in quay infrastructure and land capacity.

Furthermore, he states, they reinforce again the growing need for the upgrade of Limerick to Foynes road network, without which the company’s ability to maintain growth and help drive the regional economy.

Reflecting specifically on the 2016 tonnage breakdown, Mr Keating said that while growth at the two premier ports was very positive, tonnages at Limerick really stood out.

“The tonnages at Limerick Docks are particularly impressive as our tonnages last year were unprecedented and illustrate again the value and importance of Limerick Docks as a viable port not just for SFPC but for the region. Exports from Limerick docks more than tripled imports in 2016 so that shows just how much an asset it is for business in Limerick and the wider region.

“We have a long term plan for our property in the Limerick Docklands area but this will primarily be centred on maximising the docks as working port and improving connectivity thereto.

“We have just completed a Limerick Docklands Framework Strategy that maps out the future requirements for the working port at Limerick, as well as plans to reinstate historical buildings such as Bannatyne Mills over time. This Strategy will be launched shortly and we are confident it will have a very positive economic and visual impact on the Dock Road area based on our stakeholder consultations.”

In keeping with its previously announced capital expenditure plans, 2016 also saw the company complete Phase 1 (€12m) of its expansion programme in Foynes.

It also recently acquired a further 90 acres for storage and port development purposes to facilitate growth in Foynes and will lodge a planning application for further multiple phases of its current €50m capital investment programme shortly.

Millenis SAS arrive in Foynes with the first cargo 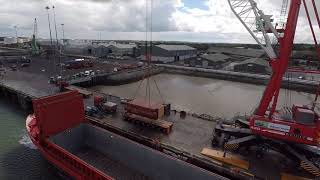 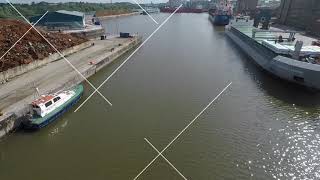 4 vessels to start the day 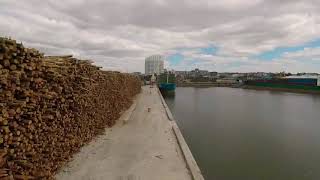 Busy Start to the week

Wilson Dvina Basking in the sun 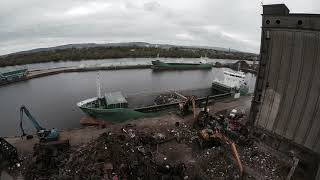